WWDC2020 is just around the corner*, and it hasn’t been one year since WWDC2019 took place. There is still a lot of ground to cover regarding the new tools and APIs demonstrated then. and In this article we will focus on a feature new to Swift itself: Function Builders.

If you have been hacking away at SwiftUI, you have probably been wondering how it makes it possible to build great UIs with very nice syntactic sugar. Other than property wrappers, SwiftUI is also possible thanks to Function Builders. In this article, we will briefly mention how SwiftUI uses Function Builders, and later we will create our own function builders that have nothing not do with SwiftUI. This way, it will become evident why Function Builders are really neat, and why they don’t have to be strictly tied to SwiftUI.

“Function Builder” is a very fancy name for something very simple. Function Builders are nothing more and nothing less than syntactic sugar. With function builders, you can create more natural syntax for your code to make it more intuitive and easier to use and understand.

If you have played with SwiftUI, you have most likely used HStack and VStack objects. They are objects though, so how come we can do something like this?:

The answer is that part of HStack's constructor takes a ViewBuilder called content:

So when we use the content parameter, we are instructing SwiftUI to create a HStack composed of multiple different views within - a complex view. SwiftUI will later convert it into in an object behind the scenes (a TupleView<View, View>, to be more specific) that it uses internally in order to render it. You can theoretically use SwiftUI without the syntactic sugar provided by Function Builders, but your code would look like a soup of generics in a world with no horizontal limits.

SwiftUI has multiple objects that work like HStack. Wouldn’t it be interesting if we could create our own function builders? To better understand Function Builders and have a better idea of what SwiftUI does behind the scenes with them, we are going to build a few them to get the concept across.

To create a function builder, you need to declare a struct marked as @_functionBuilder. Next, your struct must have a static method called buildBlock, and this method must take at least one argument of any type. This argument will be what you write inside the curly braces when calling your function builder. In SwiftUI, these are Views. Finally, the buildBlock function can return something to the caller, which can be any type as well.

In the following example, we are going to create a function builder that takes strings, and returns their lengths. We will later explore how to use it:

Now that we have the function builder, the only thing left to do is to use it.

To do that, we will create a class with an initializer that takes an argument marked with our function builder:

And finally, we can call our initializer like this:\

Call the showCounts() to see it contains the content you expect:

Now, I realize this is a very abstract example, but hopefully you can see how function builders are used, and how they work.

The above example was contrived, but if you understood how it works, let’s try building something more interesting.

The previous example was extremely generic and its main purpose was to show how function builders work and the syntax around them. In this section we will explore a real function builder you may want to use in your own projects. We will create function builders to create UIAlertControllers declaratively.

Easier to Use UIAlertControllers With Function Builders

Our end goal will allow us to create UIAlertControllers writing code like this: 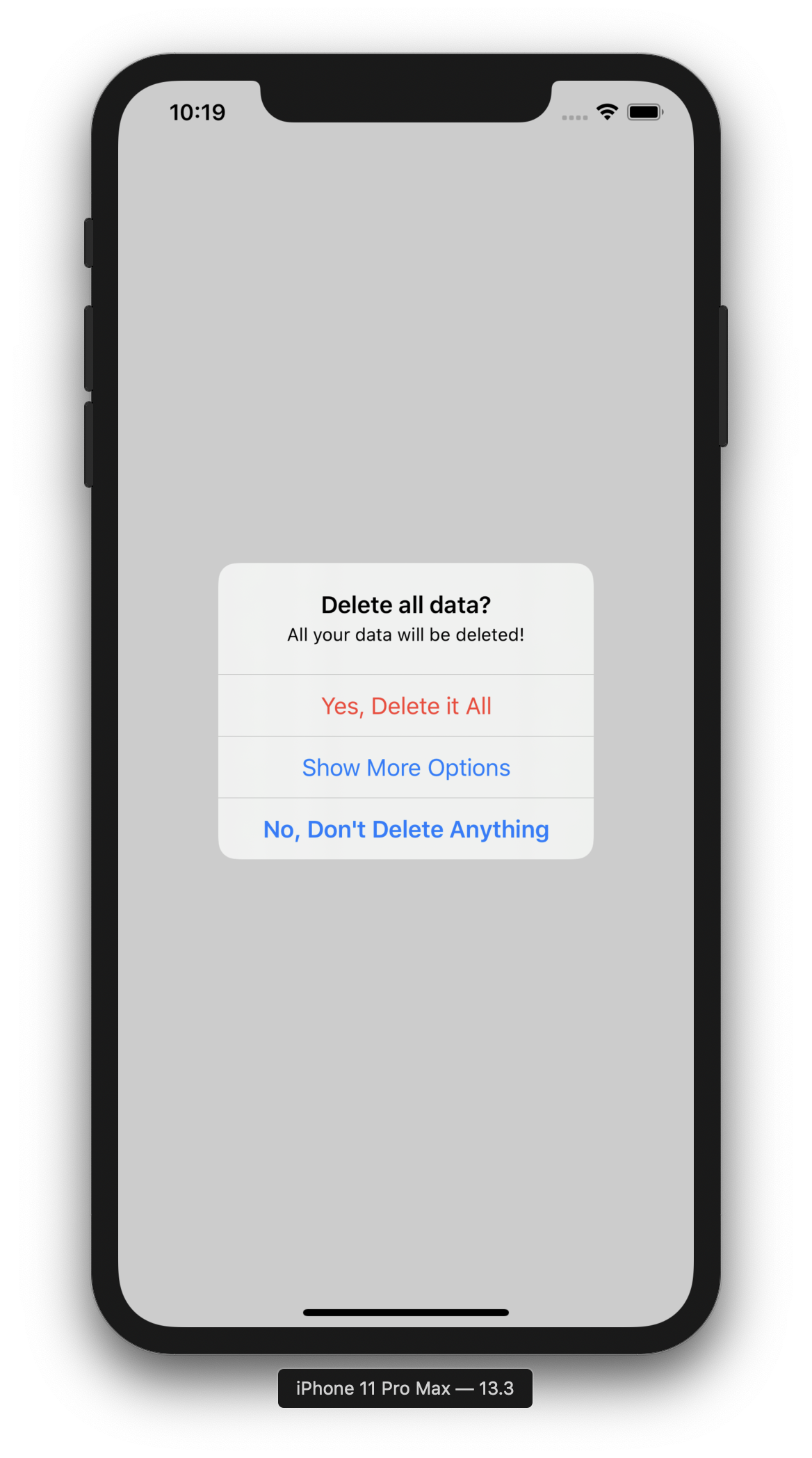 In contrast, building this same UIAlertController in pure UIKit would be longer than it needs to be:

The former is a more declarative approach, and it’s both much quicker and easier to type.

We will start by defining a few basic classes. These classes cover the title styles for the alerts, and the action to execute when one of them is tapped.

This small protocol definition will be used for the buttons:

One thing to keep in mind is that, when we write declarative code, we sometimes have to write more code in order to make the end result easier to write. You can probably make this better using inheritance, but I don’t think there’s a much of a problem doing it this way here.

The last independent class we need is the one that will handle the alert:

Now we can start writing the function builders.

The first function builder we will build will allow us to create the UIAlertActions.

The object that will make use of this function builder is the following:

So far, all the code we have written allows us to create UIAlertActions with this new syntax:

You can now use the code in the top of the session to create UIAlertControllers much easier, faster, and with nice declarative syntax.

I will be curious to see if you have any ideas to improve this. If you play around with this idea and come up with any interesting improvements, please let me know.

Swift 5 introduced many fascinating features to Swift. From property wrappers to function builders. If you use them responsibly, you can create DSLs for many tasks no matter how specific, and simplify the use of common APIs along the way.

I have converted the AlertController into a Swift Package you can add to your own projects. Its name is DeclarativeAlertController, and you can find it here.